SHOUT OUT TO OUR AWESOME OTTER DIVE COACHES!

We are extremely lucky at Oakton to have such talented and experienced dive coaches teaching our divers. All of them have been affiliated with the team for 5+ years—several of them for 10+ years! Introducing this year’s amazing team … 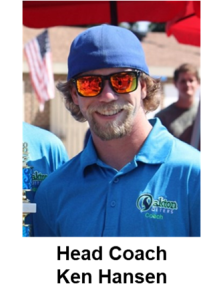 The Otters welcome back Head Coach Ken Hansen! Ken is in his eleventh summer with Oakton Otters dive team and has coached the Otters Winter Dive program for over 10 years. 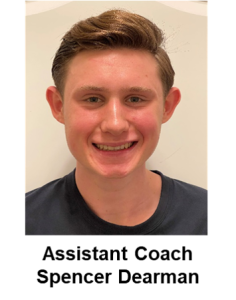 Spencer Dearman is returning in 2022 as an Oakton Otter diver and his fourth year as a member of the OSRC coaching staff.

He has been a member of the Oakton Otter Dive family for 7 years and has been competing with Dominion Dive Club at a Junior Olympic level for 5 years. Spencer has participated in the All-Star meet 5 times and placed first in 2018, and second last year in the highly competitive senior boys group. As a senior this year, he placed 4th at the 2022 VHSL State Championship meet, achieved an All-American qualifying score, and received the MVP award this past year.

He will be attending and diving at the University of Chicago this fall. In addition to diving, he is involved in cooking, computer science, and skiing. He is looking forward to this exciting opportunity to be a part of the coaching staff, and another amazing season with the Oakton Otters! 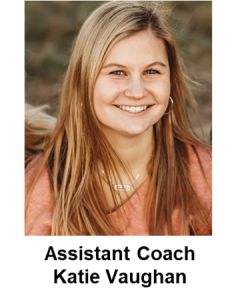 This is Katie’s ninth year as an Oakton Otter diver and her third as a member of the coaching staff.

As an Otter, Katie earned the High Point award twice and medaled six times in the NVSL All Star Championships. Katie currently trains year-round with the Dominion Dive Club (DDC), competing over the years in the AAU National Championship (1M, 3M, Senior Synchro) and the USA Diving Zones Championship (1M and 3M), and earning an AAU All-American designation five times.

Katie is a rising senior at Oakton High School (OHS) and a proud member of the amazing OHS Swim and Dive team! She is the dive captain-elect for the 2022-2023 season, and the recipient of the 2022 Coaches Award and the 2020 Team Spirit Award. She placed 5th in the 2022 State Championship Meet and received All-Region Honors and All-District Second Team Honors. As a member of the OHS team, she qualified for the NISCA All American consideration three times and received scholar athlete recognition every season.

Katie is a member of the National Honor Society, the National Spanish Honor Society, and the History Honor Society. She advocates for childhood cancer research, working with several organizations, and enjoys painting and spending time with family and friends.
Katie is excited to share her love of diving with the Otters this summer! 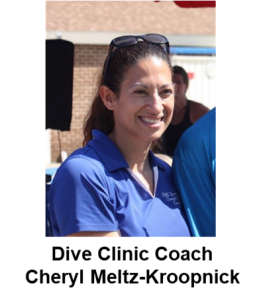 Dive Clinic Coach Cheryl Meltz-Kroopnick helped launch the Oakton Otters Dive Team in 2005 and has been coaching the Otters since the team’s inception, including running the Otters’ Winter Dive program.

Cheryl is also the Head Coach of Oakton High School’s Varsity Dive Team and has coached at the Junior Olympic level with York Dive Club and Dominion Dive Club. As a former Division I college diver for Colgate University, she was conference champion on both 1 meter and 3 meter and a National Finalist for the “NCAA Woman of the Year”. Cheryl is also a 5-time Masters’ Diving World Champion, has won 34 US National Masters Diving Titles and set one American record.

Cheryl brings a wealth of diving knowledge as an athlete, as well as 30 years of coaching experience at all levels of the sport. She is very excited for another wonderful summer dive season! 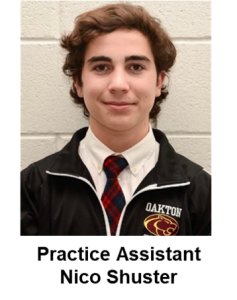 This will be Nico’s 6th year with the Oakton Otters, and his first year joining the coaching staff.

This fall, he will be starting his senior year at Oakton High School. He has competed for its dive team with Coach Cheryl and has advanced to the Northern Region Championship meets all three years. This past season, in his junior year, he scored 5th at the Concord District Championship meet. In his freshman year during 2020, he was awarded the Coaches Award and the following year in 2021, he received the Most Improved Award.

He has also been a part of Dominion Dive Club (DDC) for 2 years and competed at his first Junior Olympic meet this past March, and is looking forward to continuing to compete at more. As an Otter, he has competed in the NVSL Divisional Championship meet several times over the years and received the coaches award in 2018. 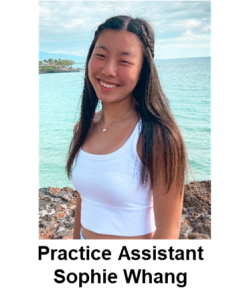 Sophie is so excited to be joining the OSRC dive coaching staff this summer and will be starting her senior year at Oakton High School this fall.

Aside from diving, she plays the clarinet in the Symphonic Band and is a Drum Major for the Marching Cougars. She is also a part of the National Honors Society, Spanish Honors Society, and Tri-M Music Honors Society. Sophie is looking forward to this great experience and wants to share her love of diving with others! She is so excited to compete in Division 1 this summer!